In case my giddy exclamations of glee haven’t been a clue, the third book in the Meant To Be Series, Mean to be Family will be releasing in just a few weeks and I am OVER THE MOON to share a few little sneak peeks with you.

I gotta admit this first scene I’m sharing is one that I love. Who doesn’t find a messy meeting adorable? 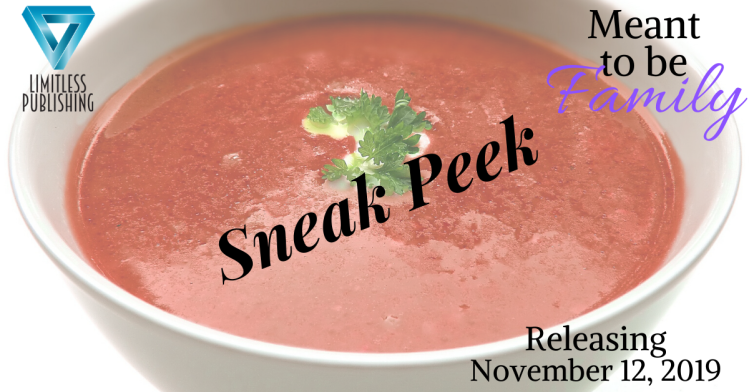 The squealed words all ran together to form one semi-incoherent one. And hit his ears about half a second after the warm liquid landed in his lap. Thank everything good the cafeteria managed to only heat their food to tepid levels. It didn’t help the fact, however, that the red liquid billed as tomato soup was now being soaked up by his khaki shorts. On reflex, he pushed the sketchpad away and breathed a sigh of relief that his drawing had been spared.

A tray clattered onto the table beside him and small hands grabbed several napkins from the dispenser nearby and shoved them in front of him. “I am so, so, so sorry. My foot slid in these stupid sandals which are completely inappropriate and I really shouldn’t be wearing anyway because they hurt my feet and I have to walk across campus three times a day for all my classes. Which is absolutely ridiculous and I have discussed this with my advisor on more than one occasion, but it isn’t like it matters anyway and—” The girl slapped a hand over her mouth. “I’m sorry,” she mumbled from behind her fingers.

Connor pressed the thin paper napkins against his shirt and pants and swallowed back a chuckle. “It’s not a big deal.” He looked up and his eyes collided with wide, slate colored ones that stood out against her dark brown hair and creamy ivory skin. Even the thought of laughing was stolen from him and he swallowed, licking his suddenly parched lips. He’d never seen anyone as beautiful as the mortified girl who plopped down on the bench seating beside him.

Her hands fell away from her face. “I tend to talk. A lot. And ramble when I’m nervous. Or when I’ve done something really stupid like pour the entire contents of my dinner on a stranger’s lap.” She groaned and slapped her palm to her forehead. “Particularly a stranger wearing khakis and a light blue shirt. Did I mention that I’m sorry?”

He looked down at the stained shorts and spattered shirt and really didn’t care about any of it. “Would you believe me if I told you that these were old? Hand me downs from my brother?”

The girl’s full lips twisted to the side and her eyes rolled heavenward. “Not for a moment.”

This time the chuckle escaped before he had a moment to stop it. “Good answer.” He wiped some of the residue that had clung to his hands while he was attempting to clean what he could off his clothes and stuck it out. “Connor.”

She offered a small smile and slid her palm against his, giving a gentle shake. “Kelsey.”

He tightened his fingers around her slightly. “Well, Kelsey, I think a little payback is due.”

Her mouth fell open for a moment before her head bobbed enthusiastically. “Yes, of course, just tell me what size you wear and where your dorm is and I promise I will replace your clothes. I really am sorry, did I say that already?”

Connor pressed his lips together to contain the grin forcing its way to the surface. “I meant you.” He gestured to the nearly empty bowl on her dinner tray. The remnants of her soup that hadn’t been deposited in his lap filled the bottom of the plastic surface. “Looks like you are out of dinner.”

She wrinkled her nose. “It wasn’t much to look forward to anyway. I have some granola bars back in my room that would probably taste a whole lot better.”

He shook his head. “How about I take you out instead?”

Kelsey’s eyes fluttered a few times, confusion tinging the edges. “I spilled my food all over you and you want to buy me a meal?” She pointed to the three quarters of what was supposed to be a turkey sandwich on the plate in front of him. “Besides, you’ve already eaten. Or are eating. Or were. Before I ruined your dinner as well as your clothes. Please let me buy you new ones or at least pay to get these cleaned.”

He squinted at her and rubbed his earlobe between his thumb and forefinger. “You really do talk a lot, don’t you?”

“You say bad, I say cute.” When a light pink tinted her cheeks and her head dropped he lifted her chin with one of his knuckles. “Please let me take you out to dinner tonight.” His gaze fell to his ruined clothes. “After I change.”

Her lower lip caught between her teeth for a moment before she nodded.

Connor’s hand dropped and curled around the one laying against her thigh, bare beneath her denim shorts. “Where is your dorm? I’ll pick you up.” Something flashed across her face and every lecture on campus safety he’d listened to freshman, sophomore, and now junior year came rushing to the forefront of his mind. “I promise I’m not a psychotic stalker that will show up and follow you around.” He winced. “Which is probably exactly what a psychotic stalker would say, but I have two older brothers, a father, and, most terrifying of all, a mother who would kick my ass if I was anything less than a gentleman.”

The answering giggle created a bubbling against his ribcage, nerves and excitement all mixing together.

His shoulders drooped slightly with relief that she didn’t think he was a total creep. “That’s kind of perfect since I’m in Ponder.” He tightened his grip for a brief moment before releasing her hand. “I’ll meet you in front of your place in fifteen minutes?”

She lifted one shoulder and grinned. “I like the sound of that.”

As soon as the words left her mouth, she stood and scurried from the building. An uncontrollable, and probably ridiculously goofy, smile stayed fixed in place while he threw away the remnants of both his tray and the one she left behind, and he jogged out of the building. “So do I.”

Add Meant to be Family to your TBR today!

One thought on “Sneak Peek! Meant to be Family”