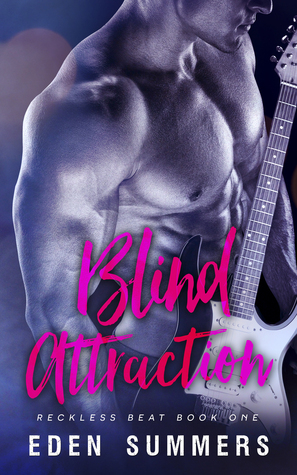 I’ve been in a bit of a writer’s block lately and decided to take a break and revisit some beloved books I’ve read in the past. Now, I have a confession to make before going any further. I’ve always been a rabid and voracious reader but… not so great at that whole reviewing thing. Yep. So basically I have now been properly educated on the importance of every review and feel like I need to pay homage to some of my past loves.

One of those books is BLIND ATTRACTION by Eden Summers. Right off the bat, I was in love because… musicians are a weakness of mine. It’s sad, but true. A guy who can wield a wicked ax, pound out a killer beat, tickle ivories with practiced perfection, or hit amazing vocal notes basically can ask damn near anything of me and get it.

Mitchell is just one such guy. He is the front man for Reckless Beat which is basically a kick ass rock band so you know what that means… they are impervious to women throwing themselves at the band mates hoping for a night they can remember long into spinsterhood. Mitchell is not displeased to oblige.

Right up until he is caught off guard by a girl with brilliant green eyes in the front row. As soon as he lays his rock star charm on her she… walks away.

See, folks, Alana isn’t a normal groupie. To say she’s led a sheltered life would be an understatement of epic proportions. Thanks to some trauma her mother has lived through which subsequently gave her mother a life’s passion of helping other women by offering a therapeutic retreat, Alana has been raised in a secluded, but stunning, rural setting. A sanctuary to many, but more like a wide open cage for Alana. Her trip to see Reckless Beat is her first concert experience.

And what. an. experience!

So, not only does Alana become the center of Mitchell’s very focused attention, but when she meets with him after the concert she finds herself mistakenly in the cross hairs of a disgruntled employee who launches a glass which shatters and catches Alana in the eye. Yes, folks, the “Blind” in BLIND ATTRACTION is literal. Alana is incapacitated for a while due to the trauma.

Here I must pause.

Okay, this is my ONLY complaint with BLIND ATTRACTION… the medical/ophthalmological information is slightly off. Yes, I am going to get technical here with you guys for a moment. I have worked in this field for more years than I’d like to admit and reading this has made me cringe a little. Alana’s trauma and subsequent care as well as treatment and symptomatology don’t exactly line up with reality. Yes, I know, literary license. But for me personally, this was a stumbling block.

But let’s put my weirdness aside, because this truly is a delightful and sexy-as-hell read with a VERY interesting sex scene later in the book that made me sit up, take notice, and then quickly become very uncomfortable in the very best possible way.

BLIND ATTRACTION is a fabulous book if you love rock star romances and girls who are pretty damn strong when confronted with demons from their past. Oh yeah, there are demons here folks, it isn’t all smexy hotness.