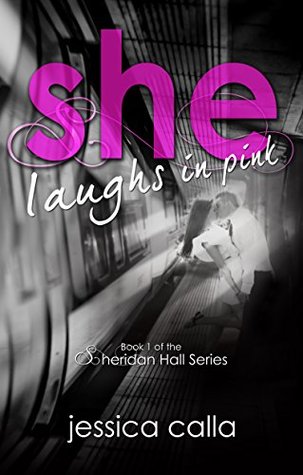 I have been knee deep in edits and writing new words (squeeee) which hasn’t left a lot of time for reviewing, but I am breaking that bad habit right now!

She Laughs In Pink is a New Adult novel by an amazing author Jess Calla. Now, anyone who knows me knows I am such a sucker for New Adult. It is literally my Disney, happiest place on earth. But I digress.

We start off with Chase and I gotta tell you, he had me hook, line, and sinker from the word “go.” Chase is a reforming bad boy (but, listen, you can’t blame the kid. He was raised by his well-meaning grandmother after losing both parents. Boy has some issues) who is taking the freshman year at NJU as the fresh start he needed to work on his NLP. And, seriously, I love characters with quirks and his repetition of NLP was EVERYTHING for me. (NLP = New Life Plan, cute, right?)

In the subway station, he finds a girl who puts those three letters in jeopardy damn near immediately. She is tall, lithe, and stunning. And basically everything that Chase does NOT need to be paying attention to. However she also plays hard to get, never gives him her name, and dances out of his life quickly.

Okay, maybe not so quickly. Because we soon find out that not only is sexy, mystery girl also a student of NJU, but just so happens to be a resident of Sheridan Hall. Just like Chase. And… on the same floor too. When I say floor, I mean basement, but still…

I’m sad to say that for all of his charm, Juliet is practically impervious to Chase’s wiles because she has eyes for one man and one man only: her BFF for 4 years, Ben. The entire reason she has chosen NJU. Ben who just so happens to be Chase’s roommate. And an actual nice guy, which kind of irritates Chase because… who wants to like the competition amirite?

Now, all of this happens in the beginning of the book. What I like to call the “I am going to lead you on and let you believe this is a light-hearted read that won’t rip your soul out” portion. You know where I’m going with this right?

Yup, because Ms. Calla is an excellent author and about halfway through I began to get that churning in my gut that let me know trouble was afoot. And shortly there after she dropped the bomb and all hell broke loose. You see, Juliet… has secrets. Chase… has secrets. Ones that have been eating them alive from the inside out for far too long.

The best part of this all is that not only does Ms. Calla create a beautiful, heartwrenchingly addictive story that keeps you turning the pages… IT IS BOOK ONE! That’s right folks, this is a series based on all the people you’ll meet and fall in love with in Sheridan Hall.

Small spoiler alert… I promise it’ll be okay. You’ll find out when you read, but just trust me, it will be okay. I am only telling you because I DEFINITELY had moments of doubt.

Check out She Laughs In Pink today!