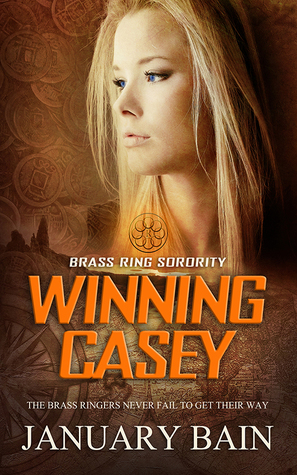 One of the first lovely authors to greet me shortly after my contract signing for Luca’s Lessons with Totally Bound Publishing was Ms. January Bain. She has been an absolute delight to get to know and a truly sweet human so I was SUPER excited to delve into her words. Ms. Bain is QUITE the prolific writer, so I asked which of her books was the best to start with and she guided me to Winning Casey.

Okay, first and foremost, I need to tell you that one of my FAVORITE all time movies is “National Treasure” (and not just because of Nicholas Cage, but that man CERTAINLY does help basically everything) and Winning Casey immediately thrust me into that same action/adventure mindset.

Casey is a strong, sassy archaeologist, although I kinda prefer to think of her as a degreed treasure hunter. She makes her life’s mission finding those things chalked up to legend. And she does a damn good job of it. But… she is independent. Kinda to a fault. While she has her Brass Ring Sorority tribe supporting her, she likes to be in control and do things her way.

Which might be a problem when Professor Truman Harrison fall at her feet (no, literally, the dude dropped into a hole right at her feet. Possibly because he was not on the approved trail… but I digress) and entices her to assist him with finding a very specific treasure that has become his obsession.

Did I mention that Casey has a strong independent streak? Um. Yeah. There may be a little bit of friction that ensues.

But friction is what causes the creation of a flame and the heat between the two is undeniable. As in hot. as. hades. Phew!

However, Ms. Bain doesn’t like to make things simple for her people and she launches Casey and Truman into struggle after struggle as they seek out the Money Pit of Oak Isle, Nova Scotia.

This is a brilliant book that lovers of romantic suspense as well as those who dig thrilling action packed stories would truly love.